Ice-Albedo Feedback and The Latest News on Climate Change

We often hear about the glaciers phenomenon that has been melting. According to the Nature journal reports from the measurement of three-dimensional satellites, it said that the world’s glaciers are melting faster with a defrosting release rate of 31% compared to 15 years ago. Using over 20 years of satellite data, scientists calculated that the world’s 220,000 mountain glaciers have lost more than 328 billion tons of ice and snow per year since 2015.

This is also the result of global warming. Temperature anomalies occur in several parts of the Earth. Earth’s temperature is getting warmer due to various human activities that contribute to the increasing CO2 emissions. The years 2011-2020 have been recorded as the warmest decade, with global average temperatures above pre-industrial levels in 2019. Which is increasing at a rate of 0.2oC per decade. The Arctic Circle has noted that temperatures in the Siberian town of Verkhoyansk hit over 38oC, possibly an all-time high. So, what will happen when the global ice sheet decreases?

Sunlight hitting the ice will be reflected into space like glass. The global ice cover decreases, so more solar radiation enters the surface and the surface temperature gets warmer, which causes more warming. This causes a decrease in albedo, which is a measure of the reflectivity of the earth’s surface. Sea ice has a much higher albedo compared to the rest of the Earth’s surface, such as the surrounding oceans. According to NASA’s Langley Research Center’s Atmospheric Science Data Center, the oceans reflect only about percent of incoming solar radiation and absorb the rest. Meanwhile, sea ice reflects 50 to 70 percent of the incoming energy. Because sea ice absorbs less solar energy, its surface remains cooler.

Ice-albedo feedback is a positive feedback climate process, where a change in the area of ​​ice caps, glaciers, and sea ice alters the albedo and surface temperature of the planet. Which CO2 in the atmosphere heats the earth’s surface and melts near the poles. Ice is very reflective, therefore some of the solar energy is reflected back to space. Ice-albedo feedback plays an important role in global climate change. Then what are the impacts of this Ice-albedo feedback: 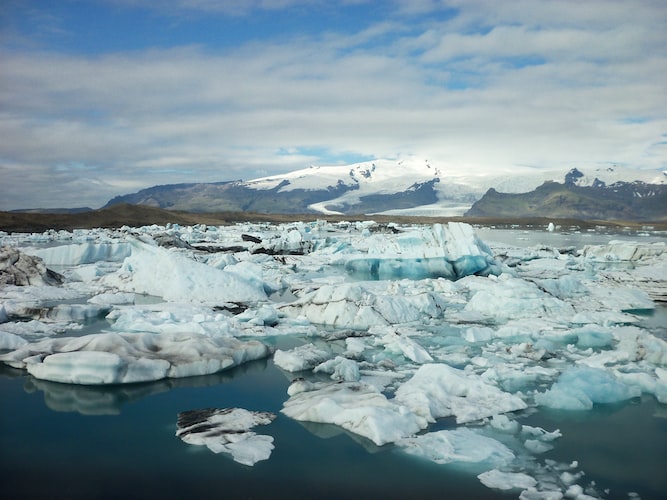 The Melting of glaciers

Ice-Albedo Feedback and The Latest News on Climate Change:

Therefore, let’s start reducing our carbon footprint by investing in energy-efficient products, and supporting climate-friendly businesses, laws, and policies. In this way, we are more concerned about climate change issues, helping to preserve the world’s permafrost and preventing a vicious circle of an ever-warming planet.

This series of the blog is part of Act Global Project of Act Now on Climate Change. We will be portraying how climate change is affecting us and what is need to do to prevent it from worsening.  Act Now!